A WEDGE TO REPLACE ALL WEDGES

This revolutionary new split-wedge technology will forever change your approach to direct composite restorations, from simple cases to complex.

VursaWedge can be used for all Class II restorations, from simple to complex. The unique split-wedge design allows the "wings" to gently curve next to and under the papilla, preventing upward displacement of the matrix band and ensuring a tight, reliable seal at the gingival margin.

VursaWedge is compatible with all major ring systems, including Garrision, Palodent, and Triodent. It's also compatible with circumferential matrix systems such as ProMatrix and Palodent 360.

To use with a ring, simply place VursaWedge in embrasure space. Position one wing over the handle and the other wing in between the VursaWedge split wings. 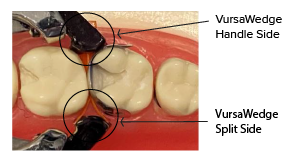 Ring should split the wings of the VursaWedge on the split side and sit on top of the handle on the handle side.

Easy to modify for tight embrasures.

VursaWedge can be modified for tight embrasure cases, especially in maxillary molar location. Simply remove one of the split wings with a pair of scissors (remove wing that would contact adjacent tooth, leaving wing that contacts the matrix band). Place ring over the handle and allow ring to press single wing of VursaWedge to seal margin.

VursaWedge comes with a second wedge, Wedge 2, which can be used to help seal irregular margins. Wedge 2 is not necessary in most cases but can be used when open margin is present or for slight furcation involvement.

VursaWedge allows both margins on adjacent teeth to be sealed simultaneously, streamlining and simplifying quadrant restorations. The split-wedge design ensures the matrices sit correctly in the proximal box, creating proper contours and contacts.

Try it for yourself...

Request a free sample and see why clinicians are raving over this versatile, time-saving system that will help you achieve superior and consistent results.

Dr. Burton has been practicing dentistry in Illinois since 2008. Like most dentists, his schedule is often filled with Class II composite restorations. After several years of practice & thousands of restorations, Dr Burton became frustrated with the available Class II matrix systems on the market. He tried nearly every system, but none provided the efficiency and consistency he desired. He found that the difficulty lies in properly placing and wedging the matrix bands. If not performed correctly, it cost him valuable time, required unnecessary post polymerization adjustments, and ultimately led to a lack of confidence in the procedure.

After contemplating ideas on how to address this matrix-wedge issue, he discovered that he could streamline and greatly simplify the Class II restoration procedure by designing a new wedge: VursaWedge. The flexible split-wing design allows for proper contour of the matrix, perfectly sealed gingival margins, and is compatible with current major ring systems. After a few years of testing, Dr. Burton realized that he had a device that needed to be shared with the dental industry. In 2017, he formed Burton Dental Innovations to begin providing these devices to other dentists who face the same challenges in their own practices.